UPDATES is a monthly email newsletter on stormwater management, assessment (including monitoring), and maintenance research at St. Anthony Falls Laboratory and the University of Minnesota.

Or Text SWUPDATES to 22828 to Join. Message and data rates may apply.

For Email Marketing you can trust

Grassed swales are shallow, flat-bottomed, open vegetated channels that are designed to convey, filter and infiltrate stormwater runoff (Barrett et al., 1998a; Deletic and Fletcher, 2005). They are often employed along highways, where highway medians and roadside drainage ditches may essentially act as grassed swales (Barrett et al., 1998a; 1998b). They have the capability to reduce runoff volume and improve water quality. Volume reduction occurs primarily through infiltration into the soil, either as the water flows over the slide slope perpendicular to the roadway into the swale or down the length of the swale parallel to the roadway. Because of wide variability of infiltration rates, even within a single swale, multiple measurements should be made (Asleson et al., 2009). A new method of measuring infiltration capacity has recently been developed (Asleson et al. 2009; Olsen et al. 2013: Paus et al. 2014; Ahmed et al., 2014), where a rapid infiltration technique allows multiple measurements to be taken over a relatively large area. Despite the prevalence of grassed swales within roadway right-of-ways that convey and treat road runoff, data on the performance of swales with regards to infiltration and contaminant capture is relatively sparse. This study will document the infiltration parameters of eleven grassed swales/ drainage ditches located in the Twin-Cities, MN.

Again at each of these three highways three swales were chosen and at each swale infiltration measurements were taken on three different days in Summer 2012 so that each day the initial soil moisture content is different. For each initial soil moisture content 18 to 21 infiltration measurements were taken. The purpose was to analyze the effect of soil moisture content on the geometric mean Kfs and distance from the outflow pipe downstream. The distance from the outflow pipe was hypothesized to be important because sedimentation should increase as the pipe is approached, and the sedimentation should decrease the Kfs.

As discussed in the method section, after collecting a soil sample from the swales located near sixteen highways, soil textural analysis was performed on the soil samples. The lists of soil texture class for different swales are given in Table 1. In Table 1, if the same highway is addressed in two or more rows it indicates that the swale located in that highway contains all corresponding textural classes of soil (i.e. Hwy 35E, Hwy 35W near TH 10). 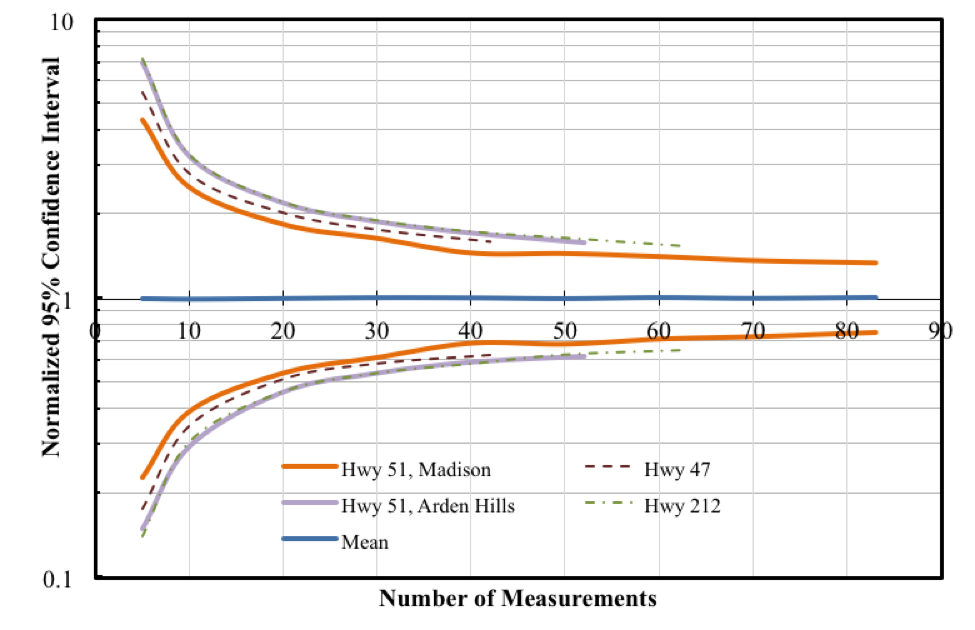 From Figure 2. we can conclude that:

Summary of derived hydraulic conductivity obtained from the infiltration measurements

For each soil texture class one highway was selected for infiltration measurement and the number of highways was narrowed down to five. Infiltration measurements were taken in the swales located near these five highways in Fall of 2011. Table 2 shows the summary of the derived hydraulic conductivity values from the infiltration measurements for these five swales. The geometric mean of Kfs was generally higher than the values provided in the literature (Rawls, et al. 1983). This could be due to macropores from grass roots that have died in past winters. The coefficient of variation is also relatively high, indicating the need for multiple measurements in order to document the mean Kfs of a given swale.

Statistical analysis was performed on the Kfs values obtained from infiltration measurements taken in Fall 2011, Spring 2012 and Summer 2012 to answer these questions:

Soils from 16 grassed roadside swales that were representative of Minnesota soils were sampled and soil textural analysis was performed on the soil samples. From these, five were selected for analysis of infiltration rates, chosen to represent the range of soil samples found in Minnesota swales. From these analyses we can make the following conclusions:

We want to hear from you!!!

Let us know your thoughts, experiences, and questions by posting a comment. To get you thinking, here are a few questions: