Funding: This paper is based on a project supported by the Minnesota Local Road Research Board under the authority of the State of Minnesota, Department of Transportation Contract No. 1003325.

Infiltration stormwater control measures (SCMs) are an important tool that can be implemented to meet the stormwater volume reduction requirements of the MPCA Construction Stormwater General Permit (Minnesota Pollution Control Agency, 2018). Infiltration SCMs include infiltration basins, bioinfiltration basins, infiltrating rain gardens, grassed swales, and others. Unfortunately infiltration practices have been estimated to have a failure rate between 10% to 50% (Bean & Dukes, 2016; CTC & Associates LLC, 2018; Hilding, 1994; Lindsey, Roberts, & Page, 1992). This failure represents significant capitol cost to remediate the practice, and the failure rate has likely inhibited the adoption of infiltration SCMs. While there are many factors that may contribute to infiltration failure, selecting an appropriate site can reduce the failure risk.

Need for an Automated Screening Tool

There is a need for a methodology to consistently evaluate the potential of a location for supporting infiltration SCMs. While experienced water resources professionals can manually evaluate the available data, these experts are not always involved at the earliest project stages. In addition, manually reviewing large project areas can be tedious and time-consuming. The criteria for determining a suitable site is not always clearly defined and may vary between engineers, which can lead to communication issues particularly on projects with multiple years from planning to bidding. Finally, siting decisions often occur prior to collecting field data and it would be beneficial to have a screening tool to guide the field data collection to the areas where infiltration is most likely to be successful. A screening tool would help provide justification for how a particular site was selected, or why infiltration was determined not to be feasible.

There are four input variables relating to the site suitability that were identified. These include the saturated hydraulic conductivity (Ksat), the depth to water table, the topographic slope, and the relative elevation. The saturated hydraulic conductivity of the soil defines the limiting rate that stormwater can infiltrate into the subsurface. The depth to groundwater describes the likelihood of groundwater-surface water interactions occurring as a result of the infiltration SCM. The topographic slope relates to the constructability and safety of an infiltration SCM, as moderately steep slopes require larger footprints than minimal slopes to construct flat infiltration SCMs and infiltrating additional water near steep slopes may contribute to slope stability issues. The relative elevation describes the position on the hillslope and the potential to direct surface runoff to an area under gravity flow conditions.

In contrast to classical logic where a parameter is classified as either false or true, fuzzy logic allows for a parameter to be considered partially true. When stated mathematically, classical logic only allows the values of 0 or 1, whereas fuzzy logic can use any value on the range of 0 to 1. Infiltration SCMs have a range of potential performance with a gradual transition from excellent to poor. The parameters contributing to the overall performance exhibit a similar gradual transition from excellent to poor. A fuzzy logic model was thus selected to aggregate the variables into a composite rating. A product operator was chosen to combine the fuzzy logic variables, as this allows a single unacceptable value to rate a given location as a poor site for an infiltration SCM. The composite rating is the Preliminary Infiltration Rate or PIR, as defined in Equation 1:

The variables WTKsat, WTdep2wt, WTslope, and WTrelel are weights associated with the Ksat, depth to water table, topographic slope, and relative elevation, respectively. The PIR defined in equation 1 outputs a number that is compiled into a category. Four categories are utilized to represent the relative likelihood of successfully implementing an infiltration SCM. The categories were established such that if a single input variable has a poor quality represented by a weight of 0.01, the composite category would be designated as Poor. However, if all input variable weights are greater than 0.01, the area will be rated as Moderate, Good, or Excellent.

The saturated hydraulic conductivity and depth to water table are available through USDA Web Soil Survey (https://websoilsurvey.sc.egov.usda.gov/App/HomePage.htm), or other methods of accessing the USDA NRCS SSURGO dataset. The topographic slope and relative elevation are both calculated in ArcMap based on a 3-meter DEM, which in Minnesota can be accessed through MnTopo (http://arcgis.dnr.state.mn.us/maps/mntopo/) or other sources. Similar DEMs are available in most states. Both the soils data and topographic data have a broad geographic coverage. 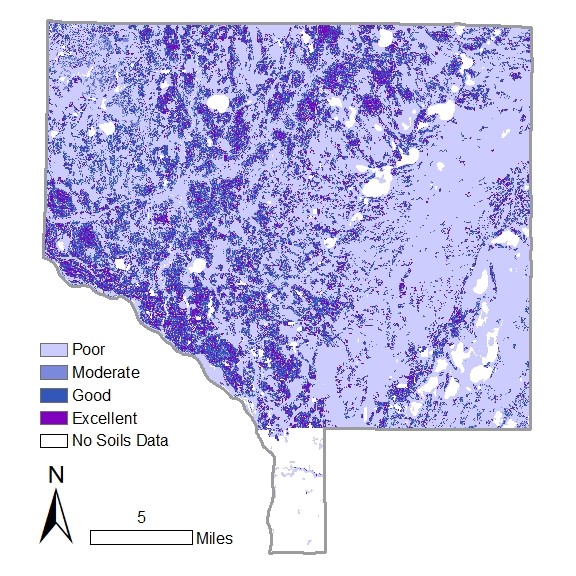 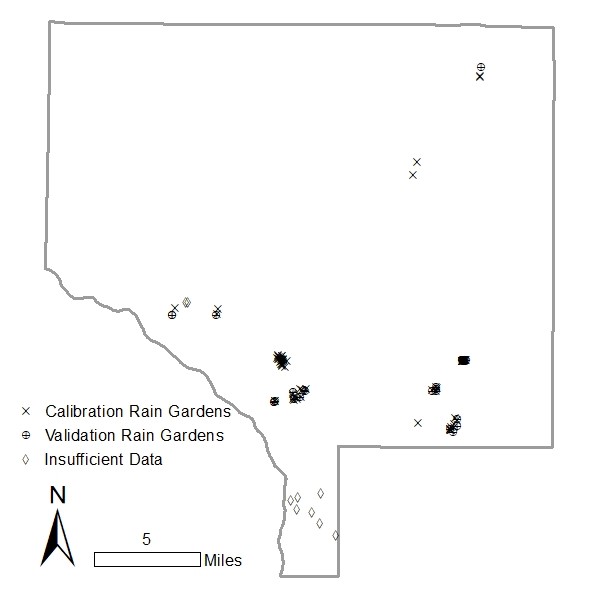 The PIR provides a rapid method to screen a large area for the likelihood to successfully support an infiltration SCM. Additional spatial data relevant to the project can be overlaid on the PIR heat map. Figure 3 shows examples of the PIR overlaid with areas where infiltration is restricted following criteria within the MPCA Construction Stormwater General Permit. Other relevant data that could be incorporated include property information, right of way information, and other types of restrictions or prohibitions. The PIR is applicable to transportation, municipal planning, private site development, and other land disturbing activities where infiltrating stormwater is under consideration.

The PIR can be incorporated into the existing project planning activities, and can provide numerous benefits including: 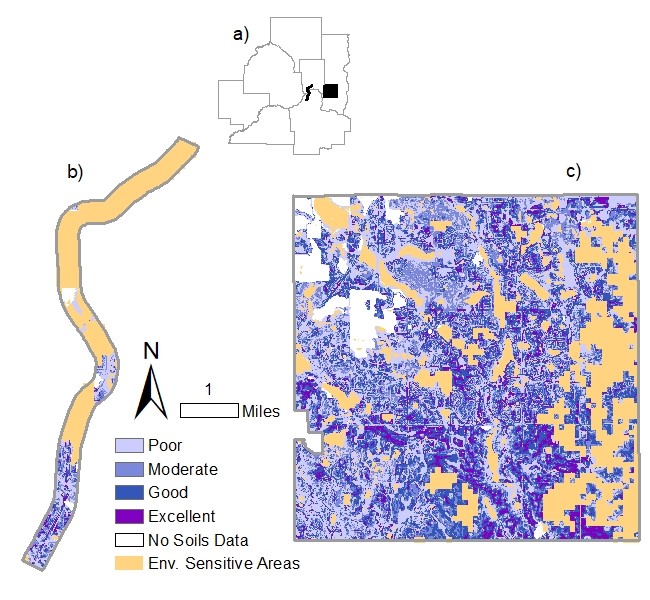 Figure 3 Examples implementing the preliminary infiltration rating with overlays of environmentally sensitive areas: (a) Minneapolis–St Paul seven-county metropolitan area with locations of examples; (b) I-35E from 10th Street in St. Paul, Minnesota, to Lone Oak Road in Eagan, Minnesota; and (c) the City of Woodbury, Minnesota.