Excess phosphorus and associated eutrophication problems are prevalent in ~40% of the lakes in the United States (2012 National Lakes Assessment, US EPA 2017). Lake phosphorus levels are influenced not only by the phosphorus load delivered by stormwater runoff and other point sources from the surrounding watershed (i.e., external loading), but also by the internal cycling of sediment-bound phosphorus (i.e., internal loading). Internal phosphorus loading, induced by depleted oxygen conditions near the lake bottom and other biogeochemical processes, is substantial in some lakes and negatively impacts the water quality. This occurs because the form of phosphorus released from the sediments is bioavailable phosphate that presents greater risk of eutrophication and cyanobacteria outbreak.

In this study, we investigated the application of zero-valent iron metal filings to lake sediments as a phosphorus inactivation tool. The hypothesis is that the iron filings will supply ferrous and ferric iron phases that will strongly bind phosphorus, thereby decreasing the release of phosphate (PO4, hereafter) from sediments. We performed experimental iron filings additions in the laboratory using lake sediment-water columns (or mesocoms) collected from two eutrophic Minnesota lakes. The main objectives were to determine the quantity of iron required and the conditions for iron dosing to effectively control PO4 release. With numerous lakes experiencing eutrophication issues, reduction in internal PO4 release can have substantial water quality benefits.

The column studies consisted of two phases (Figure 2): (1) a pretreatment phase, where PO4 releases under oxic (oxygen in the water) and anoxic (little oxygen in the water) conditions were monitored in all (unamended) columns; followed by (2) an iron filings treatment phase, where different doses of iron filings were applied to select columns under oxic conditions that were later switched to anoxic conditions. This staging simulates placing the iron filings in the lake during spring turnover. The iron filings were added at the top of the water column and allowed to settle by gravity on the sediment surface. Columns designated as ‘control’ were not dosed in the second phase and maintained under the same conditions as the iron-dosed columns. Oxic (> 9 mg/L dissolved oxygen or DO) or anoxic (< 0.3 mg/L DO) status was created by bubbling air or nitrogen gas, respectively, using bubblers placed ~4 cm above the sediment-water interface (Figure 2).

Overall, the columns were subject to oxic-anoxic-oxic-anoxic cycle at 20 °C and 10 °C, wherein each oxic or anoxic period lasted at least 30 days. Using five replicate columns for each test condition per lake (85 columns total), the water column concentrations of phosphate (soluble reactive phosphorus) were monitored on a bi-weekly basis through the study. The linear PO4 release rate (mg PO4/m2 sediment area/day) during each period, and the 67% confidence interval (CI) on the mean release rate were calculated [where, PO4 mass (mg) = PO4 concentration (mg/L) × water column volume (L)].

In general, the (unamended) lake sediments exhibited very low oxic PO4 releases at 20 °C (0.149 mg/m2/d mean ± 0.298 67% CI for Rush Lake; 0.102 mg/m2/d mean ± 0.026 67% CI; data for 25 columns). Under anoxic conditions, the average PO4 mass in the water column increased at the rate of 3.22 mg/m2/d (± 0.714 67% CI) in the Rush Lake columns and 5.60 mg P/m2/d (± 0.104 67% CI) in the Ann Lake columns. A larger than expected variability in PO4 release was observed for Rush Lake sediments, which were undisturbed cores. This highlights the natural variation in sediment characteristics in the sampling, and the importance of using several sediment cores to assess sediment PO4 release potential. Such variability was limited in the Ann Lake columns because the sediments were homogenized before column setup (see pretreatment phase anoxic PO4 release data in Figure 3).

Anoxic PO4 release rates were relatively low at 10 °C incubation due to reduced microbial activity mobilizing PO4 from the sediments. On average, the anoxic PO4 release rates at 10 °C were only one-fifth (Rush Lake) or one-fourth (Ann Lake) the 20 °C rates, signifying the importance of seasonal variation and summertime anoxia on internal loading.

At the end of pretreatment phase, all columns were switched to oxic conditions. Three iron filings doses- 0.01, 0.05 and 0.1 g Fe/cm2 (g iron/cm2 sediment area) were added to designated replicate sets of Ann Lake columns at 20 °C. Water column PO4 mass in these iron-dosed columns decreased consistently over time (Figure 3), due to PO4 sorption to ferric oxide forms in the sediment. Similar PO4 mass decrease in the control columns (zero iron added) indicates the natural binding capacity of the sediments with an oxic overlying water column. 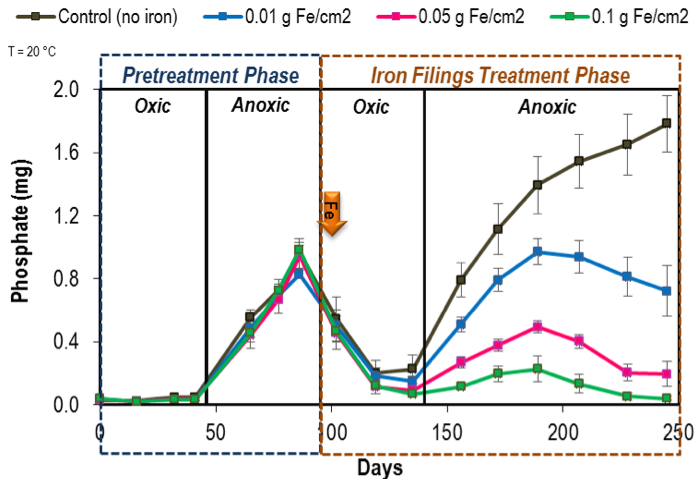 Figure 3: Mean water column phosphate measured during the pretreatment and iron-treatment phases in the Ann Lake columns at 20 °C. The error bars represent 67% confidence interval on the mean for five replicates. No iron was added to the control columns. (Note: 0.4 mg PO4 is equivalent to ~130 µg/L PO4 concentration in the water column).

Then, all columns were turned anoxic. As expected, the control sediments released PO4 as observed during the pretreatment anoxic phase. The iron-dosed sediments, however, exhibited a distinct iron dosing PO4 release response (Figure 3). After an initial PO4 release, the water column PO4 decreased and remained low in the 0.05 and 0.1 g Fe/cm2-dosed sediments, despite being anoxic. We hypothesize two mechanisms for the ability of iron filings to reduce PO4 release: 1) excess dissolved (ferrous) iron availability enables PO4 coprecipitation with iron to form minerals such as vivianite in the sediment (Roden and Edmonds 1997; Orihel et al. 2016), and 2) PO4 sorption onto ferrous hydroxides that remain in the sediment (Roden and Edmonds 1997). Together, these mechanisms decrease water column PO4 and produce a negative net PO4 release.

The effectiveness of iron filings addition in preventing oxic and anoxic PO4 releases was also evident in the Rush Lake columns that received higher iron doses of 0.1 and 1 g Fe/cm2 (data not shown). We also found minimal temperature effects on iron dosing requirement, where the addition of 0.05 g Fe/cm2 dose was sufficient to maintain <12 µg/L PO4 concentrations in the anoxic water columns of Ann Lake kept at 10 °C.

At the conclusion of the column studies, the top 10 cm of sediments were extruded from the columns and sectioned into 0.5-cm (0-4 cm depth) or 1-cm (5-10 cm depth) sections. Figure 4, showing the sediment porewater PO4 profile in the upper 10 cm of select control and 0.1 g Fe/cm2-dosed columns of Rush Lake, presents strong evidence of iron capturing mobile phosphorus in the sediments. Unlike the unamended (control) sediments, the iron-dosed sediments contained only ~10µg/L porewater PO4 in the upper 4 cm (sometimes even up to 7 cm), depths at which sediments are typically anoxic/anaerobic. Ann Lake sediments dosed with at least 0.05 g Fe/cm2 contained one-fifth the porewater PO4 measured in the control sediments in the 0-4 cm depth. 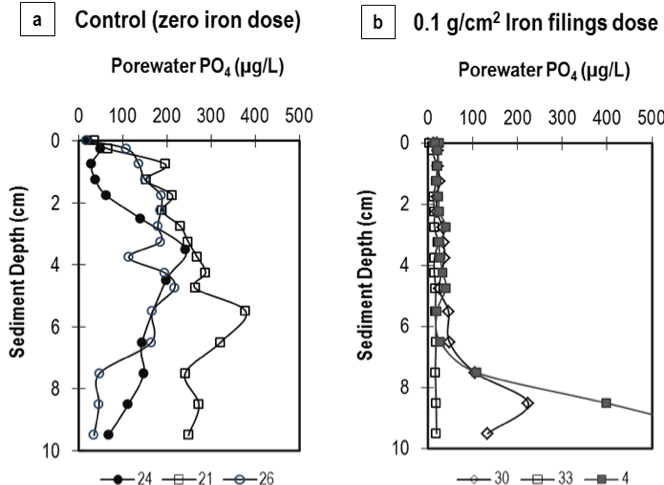 The diminished porewater PO4 levels due to iron filings addition are in agreement with the significantly low water column P and the decreased diffusive PO4 flux measured during the laboratory column studies. It can be hypothesized that a given iron filings concentration will inactivate the mobile PO4 accumulated in sediments, even under anoxic conditions, and thus suppress PO4 release across the sediment-water interface. Due to the highly fluidized nature of the upper sediments (average water content = 87%), the iron filings likely deposited throughout the upper 4 cm of the sediment during the surface application, and further facilitated PO4 capture.