Urban Stormwater Ponds can be a Source of Phosphorus

Although Minnesotans will proudly tell you that there are more than 10,000 lakes in their state, not everyone knows that there are also more than 30,000 stormwater ponds in Minnesota (Olsen 2017). Stormwater (wet retention) ponds reduce the peak flow of a flashy urban hydrograph, as well as settle out suspended solids containing nutrients and pollutants. For inland waters, the primary management target for removal is the particulate form of phosphorus (P) because phosphorus is often the limiting nutrient in fresh waters and therefore the main cause of eutrophication and algae blooms in our lakes and streams.  In this article, we describe research on how common phosphorus release from ponds is and how it occurs.

There is evidence that aging stormwater ponds can become net sources of phosphorus to receiving waters during high flow events. For example, the total phosphorus (TP) concentration in the pond should be equal to or less than the typical inflow TP concentration (due to settling). To evaluate this, we examined data from the Riley Purgatory Bluff Creek Watershed District (RPBCWD) in Minnesota. Between 2010 and 2012, the RPBCWD surveyed 98 ponds and observed high TP concentrations in a number of them (Forster et al. 2012; RPBCWD 2014).  In order to evaluate how likely these high TP concentrations were to have been caused by incoming stormwater runoff, urban stormwater runoff characterization data from the US EPA National Pollutant Discharge Elimination System National Stormwater Quality Database (Pitt et al. 2008) was fit to a log-normal distribution. The upper 95% confidence interval (95% CI), which represents the maximum value for 97.5% of the distribution, was then calculated to be 0.42 mg/L. Thus, 97.5% of the inflow data are estimated to be below 0.42 mg/L. We compared this concentration against sampling data from RPBCWD in Figure 1, which shows box plots for each of the 32 ponds with median TP concentration above the 95% CI and condenses the remaining 66 ponds into a single box plot. This analysis shows that 32% of the 98 ponds sampled had median TP concentrations greater than the 95% CI of the NPDES data (Figure 2). Our hypothesis is that these ponds have high internal P loading from the sediments, released as orthophosphorus (ortho-P or PO4-3), and are therefore more likely to experience high P concentrations. We set out to address this hypothesis through the laboratory column studies and field measurements described below. 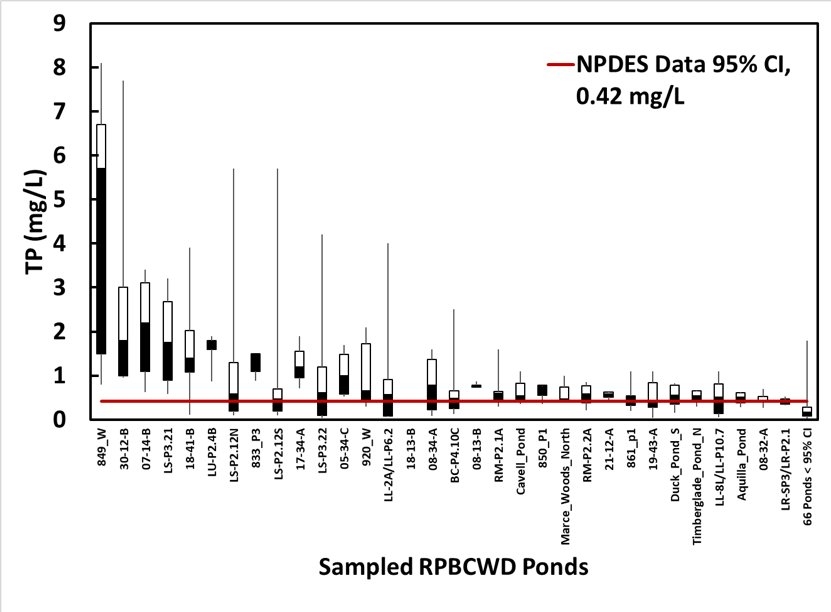 Figure 1. RPBCWD TP grab sample box plots. The 66 ponds with a median below 0.42 mg/L are combined into the far right box plot. 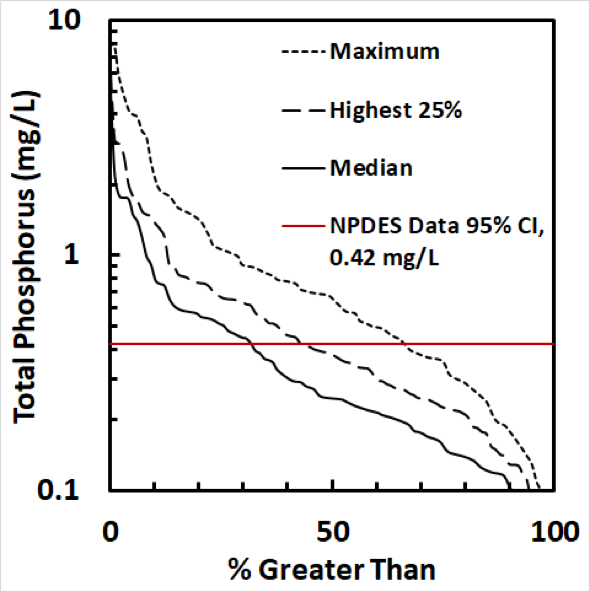 In order to address our hypothesis that P release from the sediments could be the cause of high P concentrations in stormwater ponds, we needed to identify and better understand the mechanisms controlling P release from stormwater pond sediments. We first extracted 5-6 intact sediment cores with overlying pond water, into polycarbonate liner tubes (~7 cm outer diameter), from each of five stormwater ponds (Figure 3) that are believed to be releasing sediment phosphorus.

Figure 3. Stormwater pond field sites. Pond A is in St. Cloud, Pond B is in Minnetonka, and Ponds C, D, and E are in Roseville.

Each core was incubated at the St. Anthony Falls Laboratory with more than 30 cm of sediment and roughly a meter of pond water above the sediment (Figure 4). First, the overlying water was drained and filtered through a 1.2 μm glass fiber filter to remove suspended particulates. The filtered water was then added back to the respective core with care taken to avoid sediment resuspension. The cores were subjected to phases of treatments, during which time ortho-P and total phosphorus (TP), dissolved oxygen (DO), temperature, and pH were all monitored. The water columns were then bubbled with air to simulate the mixing and aeration that takes place in spring. Afterward, air bubbling was halted and cores were left unmixed for one month. An overall sediment P flux rate was calculated from the water column P concentrations measured over the 14-day monitoring period. At the conclusion of the monitoring period for each sediment-water core, a sequential extraction of the sediment phosphorus was performed to illustrate differences in P speciation among ponds (Engstrom 2010). 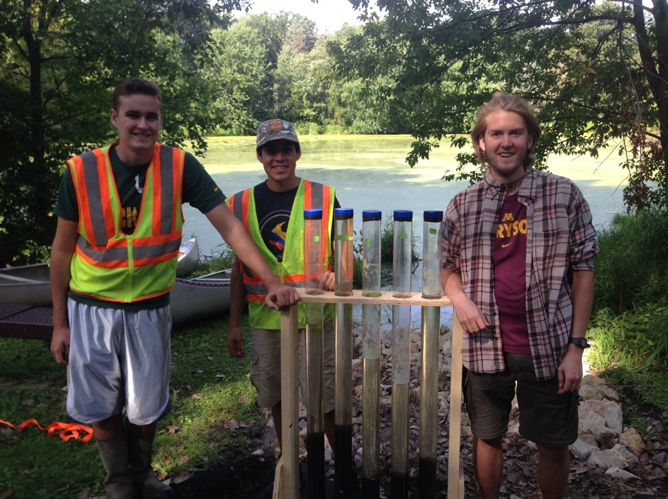 Figure 4. Intact sediment and water cores taken from Pond B. 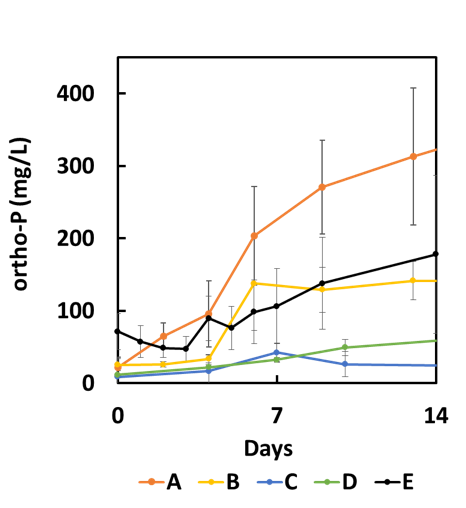 Figure 5. Orthophosphate concentration in water above the sediment cores under low DO conditions (Error bars = 67% confidence interval of the mean). The increase in concentration over time is due to P release from the sediments.

We noticed that the organic matter content in Table 1 and the initial oxygen consumption rates (due to microbial activity) following the cessation of air bubbling at the start of the monitoring period were much lower for Ponds C and D (Figure 6), suggesting that differences in P release rates could be due to differences in microbial activity in the sediments. We then tried a more detailed investigation of phosphorus speciation in the sediments. 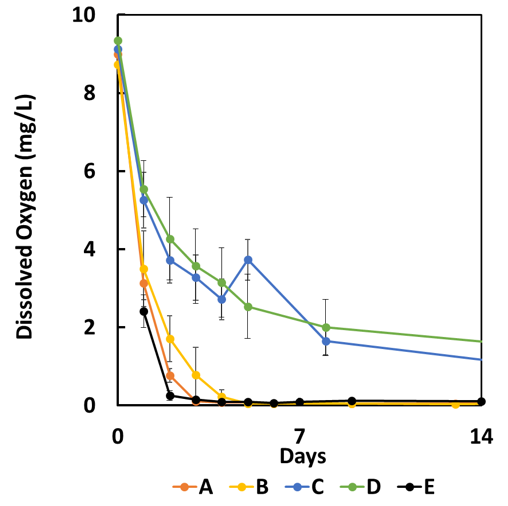 Figure 6. Dissolved oxygen concentration change at 8 cm above the sediment in the pond cores (Error bars = 67% CI of the mean). 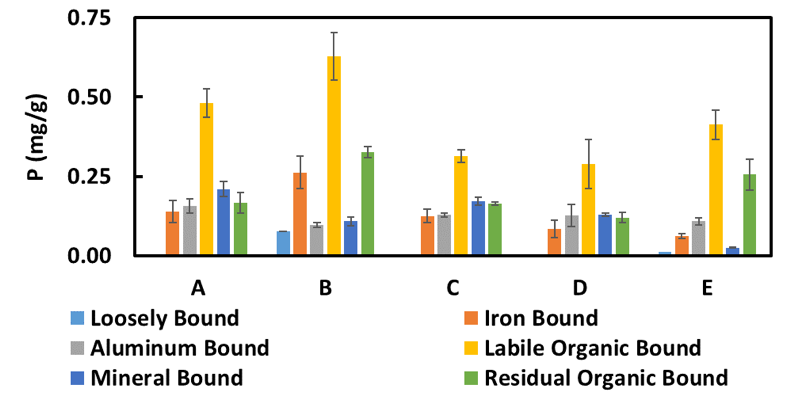 Concurrent with the sediment-water core experiments, three of the stormwater ponds have also been monitored continuously in-situ to inform the laboratory core study with the actual physico- and bio- chemical conditions affecting each pond. Periodic water samples and vertical profiles of chemistry (temperature, dissolved oxygen, and specific conductance) were collected at the center of the ponds during an entire year, including winter. Loading of water and phosphorus (dissolved and particulate) into and out of the ponds were quantified through continuous discharge measurements and automatic sampling of inflows and outflows. These latter measurements are still under analysis, but the profiles provided some interesting results.

Strong stratification in the 3 ponds prevented diurnal variations in temperature from affecting more than the near-surface water, so no overnight mixing was evident (Figure 8). Even moderate stormwater inflows did not result in complete mixing; for example, sharp temperature shifts on 6/11 from a 1-inch storm event (Figure 8) show evidence of partial mixing down to roughly 1.25 m below the pond surface, leaving the bottom ~0.75 m of the pond un-mixed (max depth = 2.0 m). 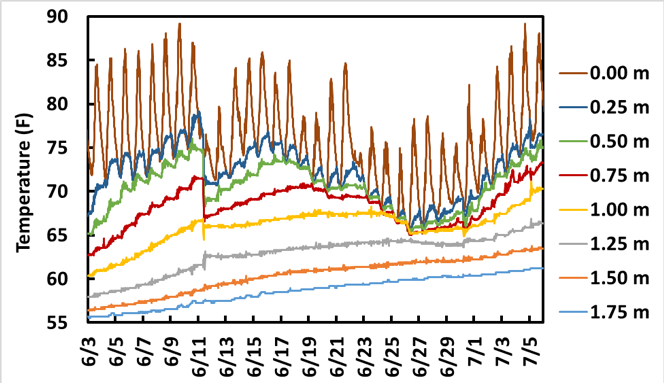 Stratification during the summer with turnover and mixing in the fall and spring are normal in large lakes, but small ponds were thought to turn over diurnally or at least during large storm events. Instead, regular manual temperature profiles throughout 2017 revealed evidence of stratification throughout most of the year, with DO concentration below 0.5 mg/L at the bottom sediment surface except for 10/20 and 11/2, following a nearly 3-inch storm event on 10/2/17 (Figure 9). 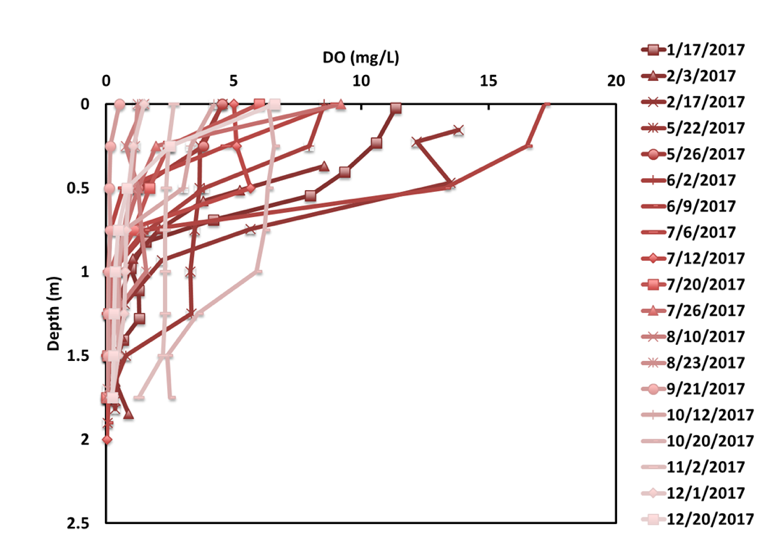 Figure 9. DO profiles for Pond E. At the bottom of the pond, DO concentration was typically less than 1 mg/L.

Chemostratification was present throughout much of the year at two of the three ponds monitored, where persistently high conductivity levels at the pond bottoms were attributed to chlorides from road salt, which makes water heavier and more resistant to vertical mixing (Novotny et al. 2009). This stratification peaked in February and slowly weakened over the open-water season (likely by diffusion and some entrainment by inflows) until October, when the pond appears to have been flushed out by a nearly 3-inch storm event after turning over in mid-September (Figure 10). By December, the pond was already beginning to re-stratify. This October – December period without chemostratification is the only time when DO concentrations at the sediment surface were above 0.5 mg/L. Thus, in addition to affecting our lakes and streams, chloride is also affecting the temperature and oxygen dynamics of stormwater ponds. The impact of this low DO concentration is that the anoxic conditions favorable for ortho-P release from pond sediments were present throughout the spring and summer.  The release rates from the laboratory sediment-water column study would be applicable during this period, potentially allowing for interpretation of observed P concentrations in the ponds. 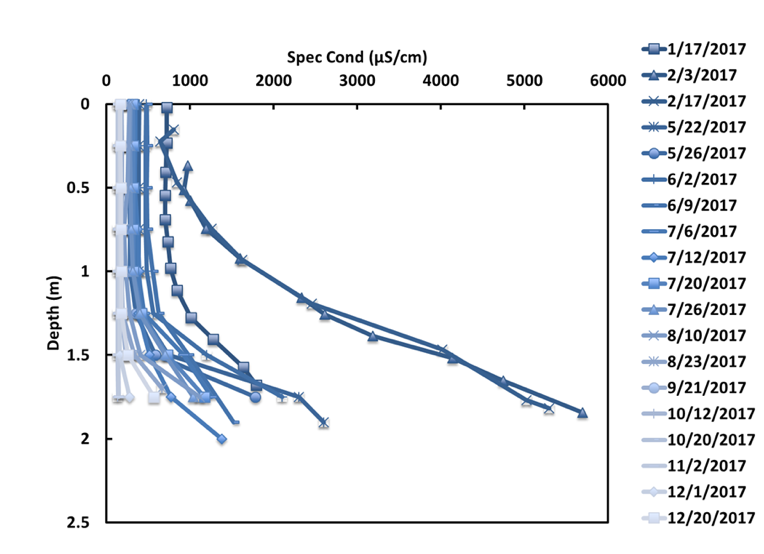 Figure 10. Specific conductivity profiles for Pond E. High conductivity at the bottom of the pond is attributed to chloride stratification.

Phosphorus concentration is unusually high in roughly 1/3 of urban stormwater ponds, indicating that they are not performing as designed. Rather than capturing P, these ponds seem to be releasing P and polluting downstream waters. We believe the reason is the sediments are releasing ortho-P to the water column, a process known as internal loading. Phosphorus release from the sediments of ponds may be facilitated by low DO concentration. It appears that many ponds in the Twin Cities Metropolitan Area are stratified through most of the summer by accumulation of road salt in winter and spring snowmelt, therefore leading to low DO concentration that promotes internal loading.  Sediment-water phosphorus flux was determined from five ponds, and three were determined to be high. Two were not as high, however, due to a lower microbial activity in the sediment as indicated by sediment oxygen demand. TP grab samples can identify the likelihood that P is being released from pond sediments through the use of historical runoff concentrations (Figure 1). This issue is believed to be more widespread than previously considered, and studies to easily identify, quantify, and remediate the release of P are on-going.