Funded by the Minnesota Department of Transportation and the City of Roseville.

Swales and drainage ditches are grassed channels that convey and infiltrate stormwater runoff from roadways. The pollutants in runoff are removed by sedimentation, filtration, and infiltration as water flows through the swales. Ditch blocks or check dams are berms constructed across swales/ditches to slow and pond the water, which promotes infiltration, particulate settling and minimizes erosion (U.S. EPA 1999). Swales reduce 60-90% TSS, 18-87% metals, and up to 60% (but can also export) total phosphorus (TP) loads (Barrett 2008; Yonge 2000; CALTRANS 2004). Although limited research data exists, the presence of check dams has been found to produce some additional pollutant reduction benefits (Kaighn and Yu 1996; Yu et al. 2001; Stagge et al. 2012).

The removal of dissolved pollutants through swales has been stated to be low to moderate because the removal is largely dependent on runoff volume reduction by infiltration (CALTRANS 2004; Barrett 2008). Dissolved pollutants require advanced treatment using an engineered media, which is currently not a part of typical swale-check dam designs. Dissolved phosphorus (DP) (primarily phosphate) and dissolved metals constitute roughly half of the total load in runoff (Maestre and Pitt 2005; Kayhanian, et al. 2012), and the dissolved forms tend to be highly bioavailable and/or potentially toxic to aquatic organisms compared to their particulate forms (Sharpley et al. 1992; Jang et al. 2005). Therefore, there is a need to develop a technology to improve dissolved pollutant retention and maximize the pollution prevention capability of swales.

The use of peat filter in a check dam was previously tested in an experimental swale facility in MnRoad and it showed moderate removal of TP, DP, and metals (Elfering and Biesboer 2003). In this research project, the iron-enhanced sand filtration technology, successfully tested by Erickson et al. (2007, 2012), was applied to design and develop enhanced ditch blocks for existing and new swales and ditches. The iron-enhanced swale ditch block is a permeable, horizontal-flow treatment system that incorporates filtration media consisting of gravel, sand and iron as the adsorptive media specifically chosen to retain phosphate and dissolved metals. As water flows through the swale, the particulates filter out and the dissolved pollutants are retained by the specialized media in the ditch block.

The main objectives of this project are to design and install iron-enhanced swale ditch blocks as part of roadway projects of the Minnesota Department of Transportation (MnDOT) and City of Roseville, and assess their performance through field testing and monitoring. If found to be effective, the enhanced swales can help gain infiltration and pollution control credits. The new ditch blocks can be beneficial in areas where right-of-way and land-expansion restrictions, and existing soil conditions that prevent infiltration pose limitations for stormwater control.

In this article, the new application of iron-enhanced swale ditch blocks is introduced and preliminary results from this ongoing project, including design development of the enhanced ditch blocks and performance data collected to date, are presented.

The full-scale design of the iron-enhanced ditch blocks was based upon the laboratory prototype developed and tested in a previous project supported by the Local Road Research Board (Ahmed et al. 2014). In the prototype, a filter bag filled with 95% C-33 sand-5% iron shavings mix (by weight; media Ksat = 0.019 cm/s) was placed inside a riprap dam, and this set up was tested in a glass flume at SAFL. The predicted steady-state pollutant retentions were ~60% for phosphate and zinc for the test conditions.

For stormwater treatment practices like grass swales/drainage ditches that incorporate plants, the impounded runoff is recommended to drain within 48 hours (Erickson et al. 2013). The contact with iron in the filter media is important for pollutant adsorption (Erickson et al. 2007, 2012). Therefore, the prototype design components were modified so that both infiltration and enhanced pollutant removal objectives, as well as a 48 hour drain time, can be achieved in the field application.

A series of laboratory experiments were conducted to select a coarser filter media, keeping in mind maximum pollutant reduction needed to be achieved. Six sand samples (D50 ranging between 1.18 and 3.25mm), and two iron shavings [D50 = 0.6 mm (iron A) and 1 mm (iron B)] were selected (Figure 1). After measuring the saturated hydraulic conductivities (Ksat) of the six media samples (sand = 95%, iron A = 5%, by weight) by constant-head column tests and performing a simple calculation on the time required for draining a given runoff volume through a hypothetical ditch block, three media were subjected to further column experiments. 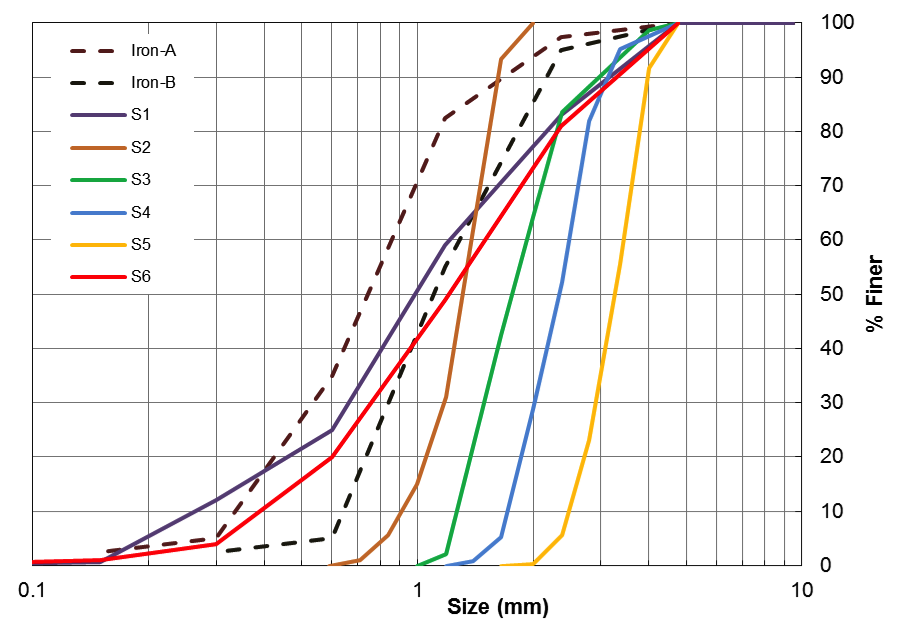 Figure 1. Particle size distributions of the sand and iron shaving samples tested for use in ditch block filter media.

The media samples tested were:

The media was packed inside upward-flow column (diameter = 5 cm; length = 38 cm), and the phosphate (soluble reactive phosphorus) retention measured for different flow rates (0.83 to 2.5 mL/s), test duration (1 to 3 hours), and dry-period between tests (1 to 7 days). Tap water containing 170 µg/L phosphate was used as the input water. The fraction of phosphate retained, [(Cin - Cout)/Cin] where Cin and Cout are the inflow and outflow phosphate concentrations, respectively, and the corresponding number of pore volumes passed through the media during nine tests are shown in Figure 2. All three media types showed greater than 60% phosphate retention under the test conditions. 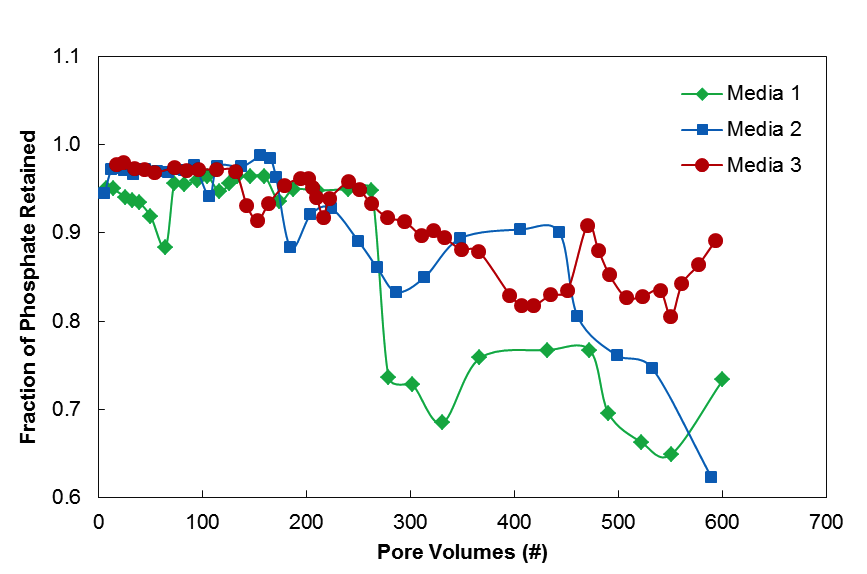 Media #3, which retained 98-85% of input phosphate, was selected for the ditch block filter application. Availability of sand (S6) from a MnDOT-approved vendor, a requirement for construction projects of MnDOT, was a factor in the media selection.

The enhanced ditch block design (Figure 3) consists of filter logs (i.e., geotextile socks filled with filter media; the geotextile fabric apparent opening size (AOS) = 0.60 mm and permeability = 0.13 cm/s, per manufacturer specification) arranged in two rows and held in place within a metal cage. The gaps between and around the filter logs were filled with loose filter media. The bottommost filter logs were ‘trenched’ into the ground to prevent flow-bypass underneath the filter. The recommended filter depth in the direction of flow is 0.31 m. Rip-rap (Class I) was placed at 10:1 slope around the filter arrangement. Following the MnDOT recommendation for the safety of passing motorists, the riprap dam was covered with top soil mix and sod. A downstream drain tile was installed to allow proper drainage of water. The monitoring wells shown in Figure 3 are for monitoring purposes only. The filter length across the swale/ditch must be sufficient to prevent water flow around the ditch block.

The iron-enhanced ditch blocks were constructed in swales in the right-of-way of MnDOT and City of Roseville, in Fall 2014. The MnDOT swale site is located along TH5 in Stillwater. While the multiple filter log design (as shown in Figure 3) was applied at one location (site #1), a modified design was employed for the second ditch block (site #2; Figure 4a): a single, large filter log was built by filling the media into the cage inlaid with geotextile sheet and then the sheet was wrapped like a burrito and sealed. The single-log filter construction involved relatively less effort and time. The filters are 0.43 m deep and the finished ditch blocks are 0.61 m tall at the two sites. An existing un-modified ditch block (soil berm) in the TH5 swale (site #3; Figure 4b) was included in the study to provide a base-case scenario for comparison with the enhanced ditch blocks; no construction was done at this location.

For the City of Roseville swale, the ditch block was designed as a filter insert to utilize an existing concrete weir wall in the swale basin. An aluminum frame enclosure, built at SAFL, was inserted in place of the existing weir and the filter logs were filled into the enclosure to form the enhanced ditch block (Figure 5).

The MnDOT swales sites were equipped with instrumentation for flow measurements and water sample collection. At the enhanced ditch block sites, the upstream and downstream water levels were measured using pressure transducers installed in the monitoring wells, and the flow through the filter computed using Dupuit’s equation. The pressure transducer-ISCO sampler-Campbell Scientific data logger system was programmed to record flows and collect volume-weighted composite samples of the inflow and outflow from the respective monitoring wells. At site #3, a calibrated weir insert was attached to the downstream drain tile for flow measurement. The upstream channel and weir outflow served as the water sampling locations.

One water truck test was conducted at each site. At the MnDOT site #2 ditch block, 16 m3 water was input over two hours (corresponding rainfall depth is 0.53 cm over the 0.3-ha drainage area). The measured flow and pollutant concentrations during the test are shown in Figure 6. The event mean concentration (EMC) of phosphate for the entire test is 206 µg/L in the inflow and 45 µg/L in the outflow. The total input mass of 0.41 g was reduced to 0.089 g in the outflow, which corresponds to 78% phosphate removal by the enhanced ditch block. However, the zinc EMCs were 70 µg/L in the inflow and 62 µg/L in the outflow, for only 11% zinc mass removal. 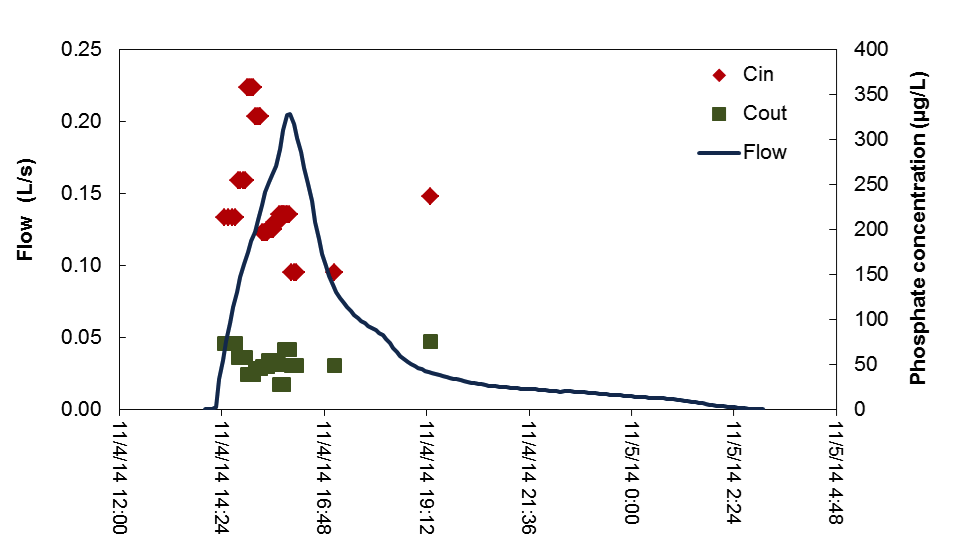 Figure 6. Results of the synthetic runoff testing at the MnDOT site #2 enhanced swale ditch block. Cin and Cout represent the phosphate concentration in the inflow and outflow, respectively.

At site #3 (un-modified ditch block), 17 m3 water was filled into the swale in two hours (corresponding rainfall depth is 0.79 cm over the 0.22-ha total drainage area). The measured inflow and outflow phosphate EMCs (one composite sample was collected) were 413 and 368 µg/L, respectively, and the mass reduction was 11%. It must be noted that phosphate concentration in the synthetic runoff increased as it flowed through swale, likely due to contribution of organic material or other detritus being degraded by bacteria in the swale. However, the un-modified ditch block provided high zinc removal: inflow and outflow zinc EMCs were 101 and 22 µg/L, respectively, and the 0.26 g zinc mass input was reduced to 0.06 g in the outflow, a 78% reduction. The higher zinc removal can be attributed to adsorption of metal on to organic matter in the topsoil (Jang et al. 2005).

Beginning May 2015, the MnDOT sites #2 and #3 are being monitored during storm events. The site #2 enhanced ditch block has shown 15-54% phosphate reduction for 13 events (mean = 40%, median = 39%). No phosphate removal (-10% reduction) occurred during the largest event recorded (rainfall depth = 10.7 cm) that hydraulically-overwhelmed the ditch block. The mean and median phosphate removals at the enhanced swale are 35% and 38%, respectively, for 14 events. At site #3, the -199 to 14% reduction observed during 10 events (mean = -53%; median = -19%) support the poor phosphate retention abilities of the un-modified swale. Results on the metal removal performances of both sites are awaited pending sample analyses.

Water truck tests were conducted at the MnDOT swale site #1 and Roseville swale. However, water was observed bypassing treatment due to leakage in the filter assemblies and the actual performance of the ditch blocks could not be determined. The Roseville ditch block has been scheduled for re-installation and testing during summer 2015.

Further monitoring and field tests will be conducted through the end of the project. The swale performances under various hydraulic and pollutant mass loadings will be assessed to determine the overall effectiveness of the new swale enhancements in reducing runoff pollution.

Summary and Next steps