Rain gardens (or bioinfiltration practices) are shallow depressions planted with native vegetation designed to infiltrate stormwater runoff and reduce contaminant concentrations in the runoff. Typical contaminants of concern in stormwater runoff include phosphorus, nitrate, metals, and solids. Because mulch and compost can adsorb dissolved metals (e.g., Cd, Cu, Pb, Zn), rain gardens containing mulch and/or compost on the surface or within their soil media will remove these metals. The mulch, compost, or even the plant material itself, however, can release phosphorus into the stormwater that has entered a rain garden. As a result, phosphorus loads may be higher in stormwater after it has passed through a rain garden. In one study the phosphorus concentration exiting simulated rain gardens was found to be as high as 0.5 mg P/L compared to an average phosphorus influent concentration of 0.13 mg P/L (Paus et al. 2014). Other field and laboratory studies have also found that rain gardens can release phosphorus (Hatt et al. 2008, Li and Davis 2009, Hunt and Lord undated). Thus, although effective at removing metals and solids, rain gardens have been shown, in some conditions, to be a source of phosphorus.

Dissolved phosphorus in stormwater, which is typically in the form of phosphate (PO4-3), cannot be removed by sedimentation and filtration, which are traditional means of treating stormwater. Phosphate has been found to be an average of 38% of the total phosphorus concentration (Kayhanian et al. 2007), although the range of phosphate percentage goes up to 100% (Erickson, et al. 2007). One method that has shown the ability to remove phosphate involves the use of iron shavings. Stormwater sand filters with ~5% iron shavings (by weight) mixed with the sand have been shown to capture an average of 88% of the phosphate load over the life of the sand filter (Erickson et al. 2012). In this design, the iron rusts, which changes the oxidation state of the elemental iron to a form that has the ability to adsorb the negatively charged phosphate ions. As the iron continues to rust over time, more adsorption sites are created and, as a result, the ability of the iron to capture phosphate is expected to last 20 years or more under typical phosphorous loading conditions, which is longer than the design life of most stormwater treatment practices. This design has also been shown to be cost-effective in that it adds about 5-10% to the total cost of a typical new sand filter.

This project tests a new rain garden design that incorporates iron-enhanced sand filtration. The new design could potentially provide a solution to the problem of excessive phosphorus in stormwater runoff discharged from rain gardens. Since rain gardens can release phosphate, it is theorized that providing a mixture of sand with 5% iron (by weight) in a layer below the top rain garden media will reduce the amount of phosphorus released by a rain garden. A conceptual design of such a rain garden, sans vegetation, is shown in Figure 1. In this design, an iron-enhanced sand layer has been added to retain phosphate released by the compost-amended upper sand layer, mulch, or vegetation. As the water infiltrates vertically downward through the system, phosphate concentrations may increase in the top layer that contains vegetation and organic material. The iron-enhanced sand layer should then retain phosphate and reduce effluent phosphorus concentrations. For research purposes, underdrains are typically used to facilitate collection of effluent samples.

Rain garden cells were constructed by filling high density polyethylene (HDPE) containers (50" L X 42" W X 45" H) with a 6-inch layer of one to two inch diameter washed gravel that contained a perforated 2-inch diameter PVC drain tile, 8-inches of ASTM C-33 construction sand, and 12-inches of rain garden media. The rain garden media, which was designed as suggested by the Minnesota Stormwater Manual (Minnesota Pollution Control Agency 2015), was comprised of a homogenous mixture of 85% ASTM C-33 construction sand and 15% compost by weight. Two rain garden test cells were constructed, one with 5% iron shavings by weight in the C-33 sand layer above the gravel and the other, the control, with no additions to the sand layer. Both rain gardens were planted with two bristely sedges, four broad-leaved purple coneflowers, two common rushes, two cardinal flowers, and two wild bergamonts. Figures 2 and 3 show the rain garden test cells. 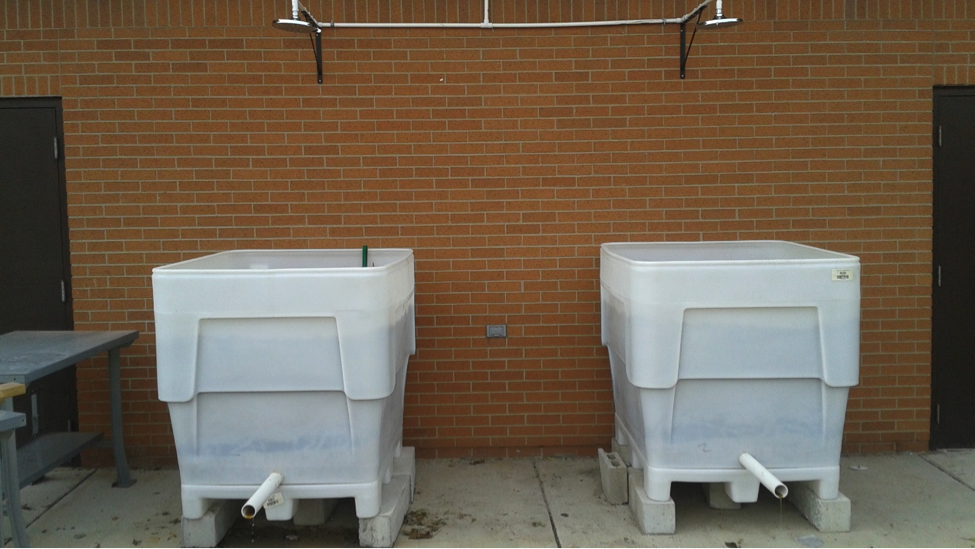 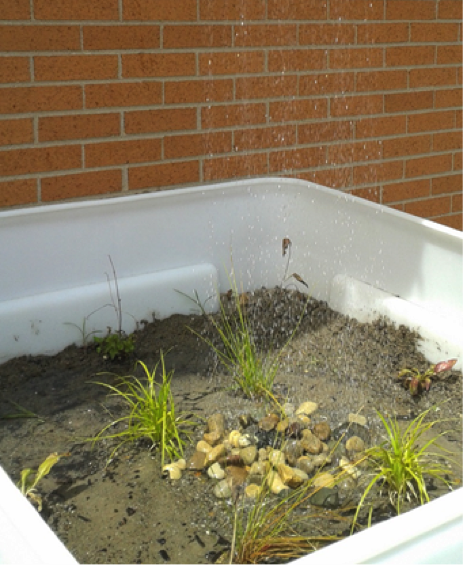 Shower heads that supplied city tap water, which contains phosphate for corrosion protection, were used to dose the rain garden cells. Influent total phosphorus concentrations averaged 0.54 mg/L P (standard deviation = 0.059 mg/L P) and influent phosphate concentrations averaged 0.50 mg/L P (standard deviation = 0.04 mg/L P). The shower heads supplied water at a rate of approximately 0.12 L/S to each rain garden. Nine tests were conducted over a period of approximately four months (once every one or two weeks) by dosing the rain gardens for two hours while continually monitoring flow out of the drain tiles. Between tests, the rain garden cells were periodically dosed with water for two to four hours at a time to simulate natural rainfall events. During tests, effluent sub-samples were collected for the iron-enhanced rain garden and the control rain garden at 50 liter effluent intervals. The sub-samples for each rain garden were combined into separate composite samples, one for each rain garden. The total phosphorus and soluble reactive phosphorus concentrations of a representative influent sample and each effluent composite sample were determined and compared to determine the percent of phosphorus retained for each test. Blanks of de-ionized water were also analyzed for soluble and total phosphorous. 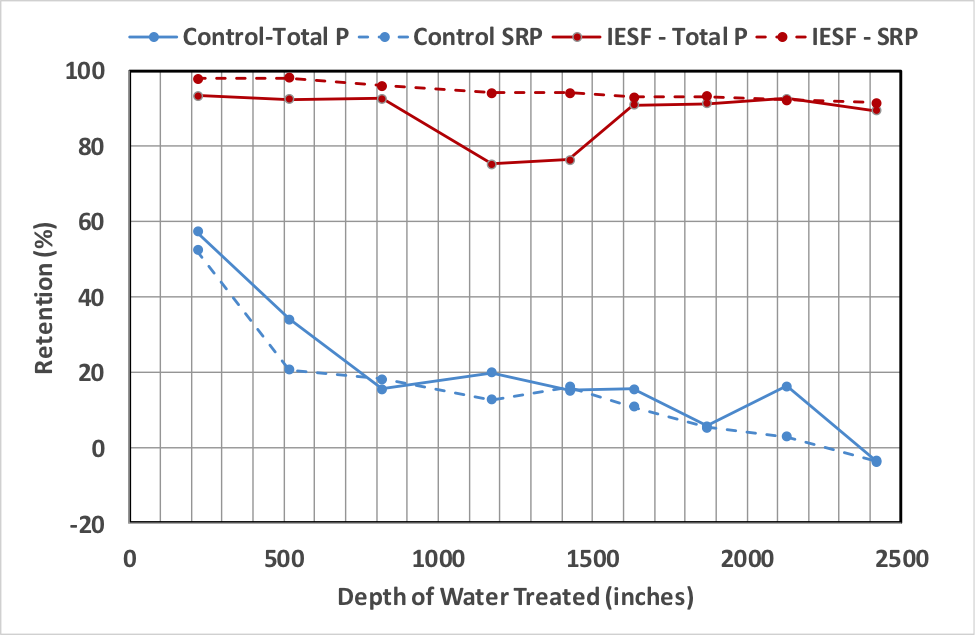 Next Steps and Summary

Testing will continue after the winter season with the project scheduled to conclude after three more tests.

These results show that the addition of an iron-enhanced layer of sand beneath typical rain garden media can improve phosphorus retention and prevent the export of phosphorus. The next step is to dose an iron-enhanced sand filter with real stormwater, to accurately simulate competition for adsorption sites and the impact of the degradation of fine organic matter upon filter performance.

This project was funded by the Indiana Department of Natural Resources, Lake Michigan Coastal Program. Special thanks to the Cardno Native Plant Nursery who donated all vegetation, Connelly-GPM in Chicago who donated the iron shavings, Duneland Sand Enterprise who donated the compost, and the City of Valparaiso and Central Elementary School in Valparaiso who were collaborators on this project.